On the surface, yesterday appeared to be an ugly day for stocks, but the damage was only moderate. Most of the losses in NASDAQ composite where at the open when it gapped down, then tried to rally, but ended up closing at only 15.58% of its daily range. Volume was relatively light, and internals were slightly more than 2.5 to 1 negative. In other words, there was little panic selling.

The strength was in Precious Metal and Mining, Biotech, Specialty Pharma and some semiconductor devices. The weakest sectors were Financials and Utilities. When stocks pull back, money generally flows into the perceived safer areas, such as bonds, silver and gold, which is what happened yesterday.

The news going into the trading day yesterday was about the weakness in oil, but that failed to follow through with oil closing up for the day. This morning, oil futures are up nearly 3% on the “hope” of an output reduction by the oil-producing countries. On one day, oil is projected to test the February low, and this morning there is a rally building on a rumor of decreased production. This is just another example of how rumors which make their way into the media, are used to move and manipulate markets.

I have been pointing out for several days that the Biotech, Specialty Pharma and health-related stocks appeared to be under accumulation. This is proving to be the case as these stocks dominate the Stocks and Groups Moving up SmartGroups. They are also prominent in the group inclusion report top 50. I first mentioned early rotation into these groups back on March 21st due to their appearance in HGSI Investor. The Biotech stocks and other health related stocks have been backing and filling for a few weeks now, and look like they are ready to break past resistance. This is a chart of the IBB, the NASDAQ biotech ETF. 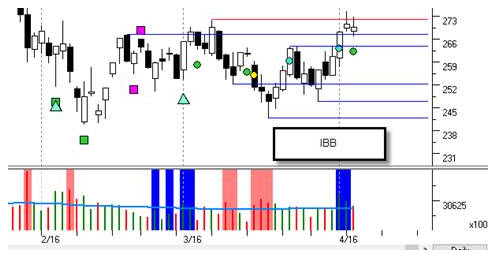 Note the recent Effort to Rise and No Supply VPA Flags. The ETF has been rejected at short term resistance, but it and many other health related stocks are building energy as they base.

Stocks futures are positive this morning, but are well off of their highs.