Stock indexes rarely get this oversold this quickly. 59% of the S&P 1500 stocks are trading below their lower Bollinger band, and 73% of the HGSI industry groups are outside of their bands. This is remarkable over a two-day period, especially since Bollinger bands expand as volatility increases. Just because stocks or industry group indexes are trading outside their BBands, it does not mean that they will snap back immediately, but the odds of a snapback rally increase as the bands get stretched.

This is a chart that you will find under Classic Woodward in the W&B Charts. The default setting is monthly, so make sure you set it to daily if you use it. For this example, I used the Biotech index which shows the closing price clearly outside of the lower band. In most instances in the recent past, these oversold Biotech stocks bounced back as bargain hunters stepped in. There are exceptions as the yellow box shows back in December and January.  This chart shows both fear and greed, the driving forces behind stock movement. It is obvious that stock fall much faster than they rise, because fear is the stronger of the two emotions.

The NASDAQ generated another of Ian’s Phoenix signals, which if you look at the indicator, is more often than not a sign of capitulation. All traders are doing here is playing the odds that stocks will bounce from oversold levels, but intermediate and longer-term market direction cannot be speculated upon until we see further price and volume action. 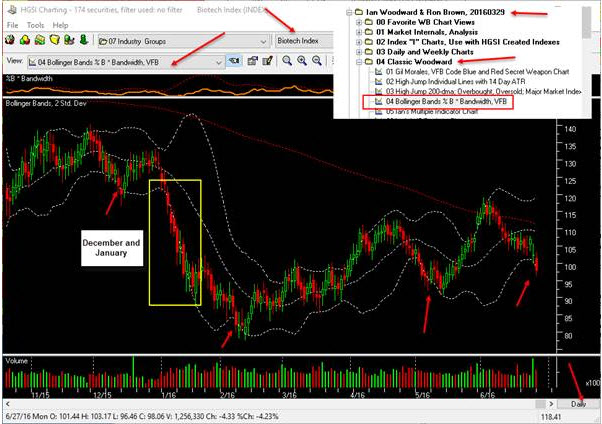 The NASDAQ composite clearly broke what I suggested was major support, but the S&P 400 mid-cap and the S&P 600 small-cap indexes held above their major support levels. Volume was heavy, but was not as extreme as Friday’s volume. At the end of the day there was a precursor to this morning’s worldwide bounce as buying came in late in the day in the NASDAQ and the other indexes. This is indicated by the percent of the daily range or all of the indexes mentioned above close slightly off of their lows. What was more revealing was the falling VIX on a very negative day for the indexes. This suggests that premium levels for puts was evaporating as traders closed positions and were no longer willing to pay up for downside protection.

There was plenty of fear in the markets as bonds traded up to new highs, and the GIR top 50 was dominated by defensive groups. Gold reached new levels for the year, but with positive stock index futures this morning, gold is down, the VIX is down again, oil is up, and the dollar index is falling as the British pound is up .94% against the U.S. Dollar.

There are a few industry groups that have been spared from the carnage, but the utilities and the REITs along with many of the traditional defensive stocks have held up best. Semiconductor stocks have been destroyed along with the large Tech stocks that everyone follows. AMZN is held up relatively well, and there is early buying in the stock this morning. Apple was getting near critical support levels, but if the market bounces, bottom pickers will step in.

The quality of the bounce matters, but it could only be an opportunity for investors to salvage what they can, and the downtrend will resume. I prefer to see some backing and filling and light volume testing for the indexes before I get too excited about a recovery. Even with all of this carnage, the indexes are still not far off of their all-time highs. If the market rallies, but fails over the next several days, it will do a tremendous amount of damage to the psyche of the Bulls. They have their fingers crossed.

Emotions are running high in the market. If they weren’t, volume would be a lot less.

Stock index futures are down again, but are off of their lows. The Dollar index is up, the Pound Sterling getting hit hard again, gold is up etc. Surprisingly, the SP E-minis were slightly positive at one point in the overnight session. Be careful, because the markets will more than likely be volatile for some time to come.