The shorts are wondering if this rally is ever going to stop, and they may soon get some relief. The trends remain up, but the volume yesterday was unconvincing as the indexes closed in the lower part of their intraday ranges. Internals were positive, but finished the day well below with a student the opening bell.

If we just look at the percentage gains for the indexes, it was a positive day, but the Spinning Top candles in the NASDAQ composite, the S&P 400, and the S&P 600 on lackluster volume suggest that this Fed -induced rally at least needs a breather. Nothing can be deduced from a single day, but a negative day today on heavier volume would suggest a failure to commit to higher prices.

The dominant group is a Semiconductor Devices group and it has been one of the strongest groups since the beginning of this rally off the bottom. SIMO, NPTN, IPHI have been the leaders in this group of stocks having at least 50% institutional sponsorship. There is an image of the top 25 percentage gainers in the Semiconductor Devices. The group also dominates the top 50 group inclusion report. The SOX was up 1% yesterday. 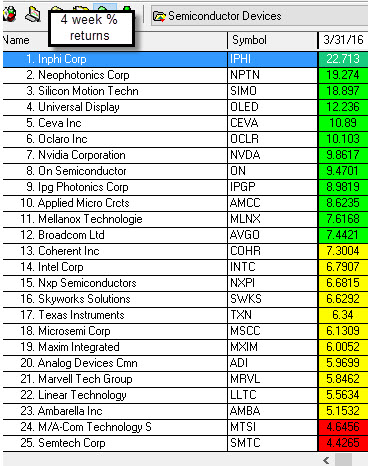 The Cruise Lines index jumped 4.2% yesterday with multiple stocks gapping open and closing near their intraday highs. For stocks in the group generated an Effort to Rise flag, and three of the four generated Pocket Pivots. I don’t know what’s going on with the group, but these stocks are worth watching: CCL, RCL, NCLH, and CUK. All have cleared their short-term volume points of control, but all have overhead resistance to the left on their charts.